Just over a year ago, I received an email from a French reader of one of my self-published novellas. This is one of the great things about being an indie publisher. You get random emails from people all over the world: people who have seen your book online and taken a risk on it. Not only that, they’ve liked it so much they’ve taken the trouble to write to the author.

But Fabien Cathelin had something else to say. He was studying to be a translator, taking his master’s degree in World Literatures and Interculturality and he thought my story would make an excellent project for his thesis.

Naturally, I was flattered and suggested that when he had finished his thesis, we might publish his translation as a French edition of the book and I would be happy to answer any of his questions about certain peculiarities of English and Birmingham argot along the way.

This proved to involve more conversations than I’d anticipated and it became a fascinating email exchange over many months that forced me to re-examine my barely realised intentions  and the breadth of allusions in even a simple ghost story.

Through this I confronted many aspects of the book:

All of the above should make it obvious that the author’s collaboration in a translation is of paramount importance if any sort of fidelity to the original is to be maintained.

But there’s also a degree of trust and, in the end, I have to trust that he knows how to tell my story to a French audience much better than I ever will.

Fabien completed his thesis at Université de Provence in Aix-en-Provence with first class honours, and I hope will go on to have a great career as a literary translator, alongside playing bass in his local cover band gumfish. 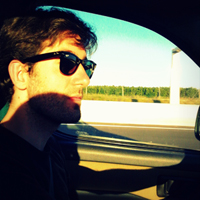 “I’m pretty glad and proud of the whole project,” he says. “I don’t know if I told you how I came to translate The Very Thought of You. I was looking for a novella to translate for my thesis, so browsing Amazon I found The Girl with the Bomb Inside, hooked by the great cover, the storyline and the Joy Division reference. As the book was a little too long for my thesis and it seemed more interesting to translate a whole book rather than an excerpt, I decided to check the other books by this author, Andy Conway, who seemed to me brought something fresh to literature: a mood influenced by Thatcherism, industrial britain, and a style I could relate to, a literary equivalent to the image I have of the Factory Records era. A mix of desperation and humor.”

He felt The Very Thought of You would be the perfect book for his thesis, being an ebook, because while e-publishing is getting bigger and bigger in France, the universities are ignoring it. “Then the theme is very good and original. It crossed multiple genres and has great cultural value, it paints an interesting portrait of the state of social services in 1980s Britain, and the spirits of the people: again a mix of desperation and humor. Interesting thing, one of my supervisors compared Jez to Meursault in The Stranger by Camus. And finally, I thought translating an ebook would give some sort of promotion or give credit to an author who doesn’t have the financial means to get a huge publicity, and show that you don’t need to sign to a big publishing house to write good books.”

Now that Fabien’s translation is finished, I have formatted a new edition of the book, entirely in French and published it alongside all my others. I doubt if it will sell many copies on amazon.co.uk but publishing it there means it’s also automatically on amazon.fr and that’s hopefully where it will sell a great deal and give Fabien some material reward for his hard work.

It’s a dauntaing task, translating your works for foreign markets, and something that might seem way beyond the means of an indie writer, but when the stars align as they have in this case, it can become so simple.

You obviously need a translator who is both passionate about your work and willing to undertake months of unpaid work on the possible promise of future income, or be undertaking the work for another reason (a university thesis in this case).

Those things don’t drop into your lap every day, but by putting your work out there, publishing on Amazon (which automatically means publishing simultaneously in France, Germany, Spain and Italy), and being receptive to the people who take the trouble to write to you, you can make it happen.

My work is now published in two languages. Never thought I’d say that. And more to come, I hope.

While the main thanks go to Fabien Cathelin, of course, I’d also like to thank indie author David Gaughran, whose article The Profit-Sharing Translation Model provided a simple framework for the project and who was also kind enough to send me his draft contract agreement.

The next self-publishing frontier: ebooks in translation – at Paid Content